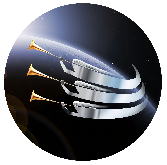 Triangelos is a Christian choir with base in Ulsrud, a Seventh-Day Adventist church located in Oslo, Norway.

The name Triangelos refers to the Three Angels' Messages found in Revelation 14:6-12. On so many levels we find this to be a very important message to humanity in our time. We wish to give praise and thanks to our Savior and Creator, which should be clear from our choice of songs. They revolve around who God is and His great love, which gave us life, presented to us through His Word.

Over the years we have have visited many churches and congregations, covering most of Norway and even our neighbours, Denmark and Sweden.

Our beloved director is Inger B. Berger. She has been leading us since the first choir practice, January 8th,1992. The members are mainly from the SDA churches in and around Oslo. The choir usually runs with around 20 members which gives a good number in each vocal group while still keeping it small enough so everyone are important.

We have also released six CD albums throughout this time, the first being Din Stemme (Your Voice) which was released in June 1994. Av Nåde (By Grace) was released in April 1996, and Dråper til liv (Living Water) in Mars 1999. Kommer du ei snart? (Will You Come Soon?) In June 2012. Being a Norwegian choir located in Norway we have for the most part focused on Norway and Scandinavia.  That's why you will find our previous albums are in Norwegian. The album, The Seventh Day, July 2015, is in English with a special focus on prophecies and the Three Angels' Messages that we would like to proclaim to the world. Our latest CD, Christmas All the Year, was released November 2018.